The year is 2020. We are in the middle of a global pandemic spending time at home in quarantine and I’ve finally decided that now would be a good time to pick up one of the most loved ya-series ever for the very first time . You might be surprised but before reading Clockwork Angel I had never read anything by Cassandra Clare before i.e. I had never read a Shadowhunters book before, nor the movie adaption (which isn’t everyone’s favourite, is it?) or the tv show. How come?! Well, I don’t know why but somehow I never was in the right mood to start The Mortal Instruments and when the “trend” of the ya-paranormal genre started to flatten I lost interest in started trying out other ya subgenres (e.g. historical fiction) which made me love the setting of Victorian London. So, it was clear to me (after watching Emma’s video in which order to read the Shadowhunters books) that while TMI intimidated me because of its length I could still try out the prequel trilogy first and see what happens.

And, now we’re here, almost ten years (!!) after the release of Clockwork Angel and the start of The Infernal Devices and I’m trying to (as the last in the goodreads community for sure) sort my thoughts about this book and I’m sure that this will be amusing and entertaining for those of you who have already immersed themselves into the Shadowhunter world a long time ago…

Note: This review may contain spoilers! Read on at your own risk.

book 1 of  The Infernal Devices series

In a time when Shadowhunters are barely winning the fight against the forces of darkness, one battle will change the course of history forever. Welcome to the Infernal Devices trilogy, a stunning and dangerous prequel to the New York Times bestselling Mortal Instruments series.

The year is 1878. Tessa Gray descends into London’s dark supernatural underworld in search of her missing brother. She soon discovers that her only allies are the demon-slaying Shadowhunters—including Will and Jem, the mysterious boys she is attracted to. Soon they find themselves up against the Pandemonium Club, a secret organization of vampires, demons, warlocks, and humans. Equipped with a magical army of unstoppable clockwork creatures, the Club is out to rule the British Empire, and only Tessa and her allies can stop them…

Maybe I should start this review by saying that my knowledge of Shadowhunters and this whole world Cassandra Clare created was nonexistent when I started with Clockwork Angel. Therefore, I did have to find my way into it at first not knowing what kind of beings exist , what kind of purpose runes have and what shadowhunters actually do. What is a Downworlder? Who works with whom? These kind of questions. I had not read TMI and I think it showed although the author seemed to explain the world by making her main character ask as many questions as possible (thank you, Tessa!). Eventually, I do think that I now have an okayish basis to read the rest of the series and I don’t really want to blame anyone for it but myself considering that I started not with City of Bones but with Clockwork Angel.

Either way I think that the Shadowhunters concept is really refreshing in a nostalgic kind of way. Vampires humans (mundanes), ghosts, demons, warlocks and (shadowhunters of course) – everything you need for a paranormal ya book released in 2010 and don’t get me wrong, it’s everything you still can include into your paranormal ya book when you want to write one today. And, of course the setting of Victorian London is always a yes from my side.

As for the plot of the book I thought that the first third of it was a bit more difficult to get through and that it had many fillers overall which stretched the story in a way I didn’t quite enjoy. The last two thirds were really fast-paced. For me, nothing can top the part where Tessa and Will while being disguised visit one of de Quincey’s meetings.

I also would like to take a paragraph to talk about all the tropes in this book: The chosen one? Yes. A love triangle? Doesn’t seem to work without one, does it? A breath she didn’t know she was holding? BIG YES. And, I am sure you’ll find many more. I don’t know if this has something to do with the fact that this book is almost 10 years old or not but still, I think that it’s quite cliché. I don’t have anything against tropes and have favourite tropes myself but I felt that we have a lot of tropes at the same time here.

And, now here’s what I thought about the main characters – *drum roll*;

“One must always be careful of books,” said Tessa, “and what is inside them, for words have the power to change us.”

→ Tessa isn’t really my favourite MC. Not only does she not like chocolate nor Alice’s Adventures in Wonderland but I also found her being extremely contradictory. In one chapter you’ll find her criticising another female character for wearing pants, fighting and leading (which I guess are big no-goes during her time) and in the next one you’ll find her talking about how she must do – more or less – the exact same thing…? Tessa confused me several times but what I did like about her was her love for books and her detetermination. So, I am patiently waiting for her character development to come so the damsel in distress trope can pack its bags and leave.

→ Will, Will, Will. Where to start when talking about Will? Before I started Clockwork Angel I had heard of Will Herondale. Really it’s not too difficult not to. To be honest, I don’t really know yet what to think of Will. He’s rude, pretends to not care all the time, and seems a bit narcissistic. Maybe that has something to do with his mysterious and sad backstory (most certainly). But what I do have to give him credit for is how he does care for Jem and apparently Tessa too. And, yes I do think that Will’s incredibly funny. While reading I found myself chuckling because of some dialogue or passage. I don’t know if that makes up for how often Tessa mentions his “beautiful blue eyes”…

“Whatever you are physically…male or female, strong or weak, ill or healthy–all those things matter less than what your heart contains. If you have the soul of a warrior, you are a warrior. All those other things, they are the glass that contains the lamp, but you are the light inside.”

→ Jem is so far my favourite character and I have the strong feeling that this will remain as it is. Not only do I think that Cassandra Clare did a good job at introducing him as a real character with favourite places to go to and hobbies and everything but she also has a well-though out backstory for Jem and personality traits. I feel bad for Jem knowing that he will be used for the love triangle drama. I am absolutely looking forward to read Clockwork Prince and hopefully get to know more about him.

Next to the main characters I also really liked the sides characters! From confident Charlotte, to grateful Sophie, to Magnus Bane (I finally get the hype around him, guys.) – I think that in a way these characters were even more fun to follow than Tessa and I really hope that we get to know them better. Only Jessamine is someone I couldn’t feel sympathy for which is probably because of the way she behaves around the rest of the characters. Talking about character constellations and relationships, there were a lot of fun dialogues in this book and I do really like Cassandra Clare’s humour. Here is a collection of dialogues I think were especially funny though you probably know them by heart: 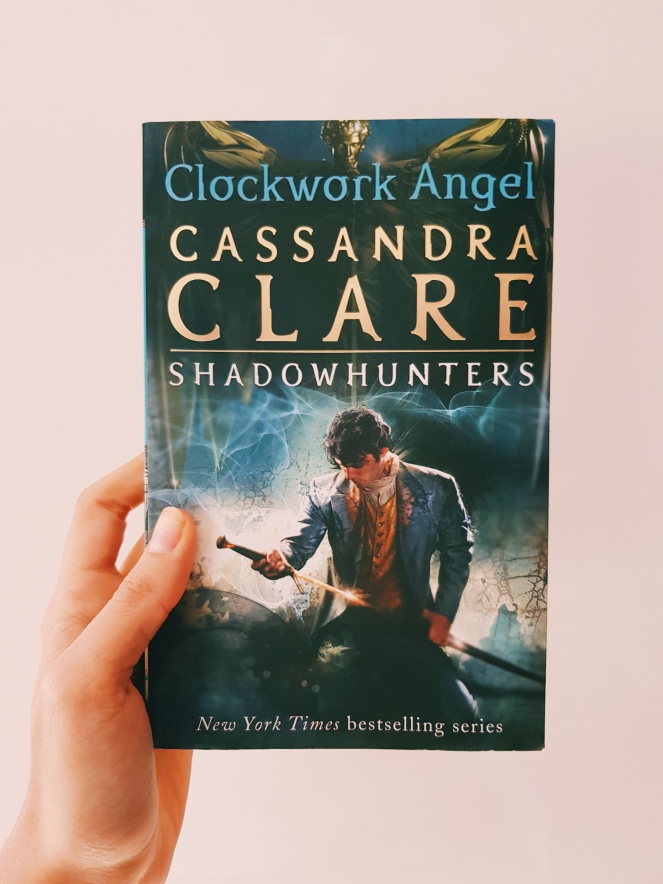 “Dreams can be dangerous things.”

All in all, Clockwork Angel was a solid 3.5-star read. It was not a bad read nor an extremely amazing reading experience and when I thought about all the other ya books I have already read I decided that it’s better than my usual 3-star reads but when looking at the issues I had with it not as good as other 4 star reads. I will continue with TDI and move on to the next books in the series hoping that the sequel can impress even more.

What do I expect for Book #2? More scenes of Church, the cat, a lot of headache problems for poor Charlotte and (hopefully) some information on Will’s apparently tragic and mysterious backstory.

What do you think about the Shadowhunters books? What is your favourite series and book out of them? Did you enjoy Clockwork Angel when you first read it? Feel free to let me know!

2 thoughts on “I read MY FIRST Shadowhunters book! 🌑| Clockwork Angel by Cassandra Clare”

Linda is a soon to be uni student, avid reader and, apparently, this website's book blogger. Aside from having her nose in a book she can often be seen watching tv shows, playing the piano or trying (in vain) to reduce the never-ending pile of unfinished school papers.